The Oneiric Realism of Contemporary Moldovan Photography | for ARTA Magazine

Magical realism with a shot of sadness, to go. This is how I’d characterize the aesthetic of contemporary Moldovan photography, by reducing it to its essence. I find a sort of dreamlike realism browsing through the series of Mikhail Kalarashan, Maria Guțu, or Ramin Mazur. It’s a dream in which sadness and joy converge and the focus lens brings one or the other into the center of attention.

It’s not only the aesthetics but also the context that is both full of anguish and of hope. The anguish is that of oblivion, of the lack of discourses to coagulate and to historicize the Moldovan photographic practice, even though, very recently, the State Archives of the Republic of Moldova started to put out historical photographs in the public space, on Instagram. Hope is tied to regional cooperation and solidarity: lately the Centre for Documentary Photography in Iasi has been supporting Moldovan documentary art photography, by offering them a platform of expression and grants. In this context, I chatted with Ramin Mazur, Maria Guțu, and Mikhail Kalarashan about how they see the recent evolution of the photo scene.

The mix of registers, this hybridization of photography is, in fact, the essence of its emancipation as an art, its break from the straps of “veridical representation.” Following the emancipation of painting during Modernism as well as the development of photographic techniques, photography was forced to take over the need of representation and then started to be considered just that. However, in contemporary photography, document-images sit together with fiction-images and in between all hybrid-images infiltrate, à la Jeff Wall (photos that only seem to document, but in fact they are staged). The regional New East Photo Prize is a fair example on this. It sets within a unique frame, an aesthetic one, documentary photography such as Tomasz Liboska’s series in which he looks at the becoming of Upper Silesia during the past 10 years with constructed photographs, such as Hassan Kurbanbaev’s Owning the World at Half Price, in which he presents the “obsession” of some Uzbeks to wear fake luxury brands. In our post-truth world, everything is true and fictitious at the same time. This is also what Ramin Mazur is referencing, when I ask him about the role of photography today, when anyone has a camera in their pocket:

“I guess the main advancement of photography in our days is an evolution in narratives and abandonment of the idea of its objectivity. Photography has become a tool that we use in the visual arts to bring an audience to various perspectives, along with all other mediums. In daily life it has become the obvious tool of communication. People have become more needy and don’t look at any photograph as they do at other forms of art. As with words, the fact that you can write doesn’t mean that you can write a novel. A novel appears when there is an intention to do so.”

Ramin Mazur, born in Transnistria, worked a while as a photoreporter but after a while he could no longer accept the lack of professionalism and of comprehension with regards to his work, so he decided to go independent. He often documents practices in Moldova or Transnistria, consistently applying self-reflectivity and self-critique upon his visual imaginary. For instance, photographing his original Transnistrian region, he realized that he was merely replicating the same cliché discourse of other journalists, an self-exoticizing one, in which decay and oblivion are the main things visualised. Revisiting his practice, Mazur tried to visually reappropriate this space, and the aesthetics of the Left Bank series is a subjective one that makes no judgement, realistic and dreamy, reminding me somehow of Mario Vargas Llosa’s landscapes and happenings. The effect intensifies when browsing the masks from Rural Carnival, a series in which Ramin documents archaic village carnival practices, in which “alterity” is imagined as cheerfully grotesque, frightening but dancing.

If we talk about the Republic of Moldova everything is quite unclear for me. We never had a formal or informal school of photography. So there is no generational increase in interest, but people who find their own path. I would rather look at the entire region of so-called Eastern Europe and the tendency to overlook what we are and where we go. Instead of just consuming premade ideals and adapting them here, we try to reevaluate the state we find ourselves in, explains Mazur.

Further on, my gaze finds Maria Guțu’s characters, a young photographer interested in the connection between isolated places and their people. Browsing her photos, this photo of a young guy jumping off an abandoned boat catches my attention and we start chatting about Stânca-Costești dam, on the border of Romania and Moldova. A few years ago I visited this dam, built in 1977, and I was impressed by its wideness of 59 km², making it the largest accumulation lake in Romania. For its construction, the Romanian side had to move 7 villages, while the Soviet/Moldavan one 11. Maria tells me about Duruitoarea Veche and Duruitoarea Nouă, separated by the dam and which used to interact though a barge. If back then, with this water way, the distance between the 2 villages was of 2-3 km, it is now of 40 km, because one needs to go around the lake on a country road. “People had to build their houses again, they even moved the church,” shares Maria, from her field work on the inhabitants of a village now covered by water.

Part of the „Homeland” project. Photo from a mini-series dedicated to the artificial Costești-Stânca dam, built in 1976, on the former Costești village. In the photograph, the derelict barge was used as a trampoline by many youngsters. Courtesy of Maria Guțu.

Guțu graduated from the Arts Academy in Chișinău this year and for the moment she simply enjoys living in the countryside, while considering a Master’s abroad. Yet, in the long run, she says:

I don’t want to leave the country. The Republic of Moldova is brimming with subjects, with stories that can and must be documented. As a young artist, the country does not offer the necessary support for a complete artistic activity, personal, documentary projects remain to be financed from one’s own pocket, from other projects, or from grants from outside the country. Another issue would be the lack of exhibition spaces dedicated to photography and young people look for spaces abroad or online. With all such difficulties, I notice more young people interested in documentary and art photography and I hope this will bring positive changes in the cultural environment in our country.”

In a similar aesthetics (which will probably unite them soon in a phrase such as “the new Moldovan wave”) Mikhail Kalarashan also captures the authenticity of the Moldovan village, still guarded by the capitalist spleen of the large city. I also talked to Mikhail about the local context and his life as a documentarist in Moldova:

In a poor state, social problems stay at the surface, they are easier to notice. That’s why, being a documentarist in Moldova is a captivating job. Yet, you are not safe from this precarity – in Moldova it is complicated to only do your own projects on a long term, without being distracted by projects that can bring you an instant income, and this saddens me. At the same time, here we have plenty of projects that can be explored. The presence of so many cultures on such a small land is a curious phenomenon, anthropologically speaking.

Regularly I like switching to photojournalism, doing special projects for the local or international press. However, despite my busy activity (I only do photography), I feel some sort of isolation in Moldova. We documentarists are quite few in Moldova – there’s no movement, we lack novelty. I look over at those in Russia or Europe with a bit of envy, because there are so many things happening over there. Being a documentarist in the Republic of Moldova means going round on the same spot. 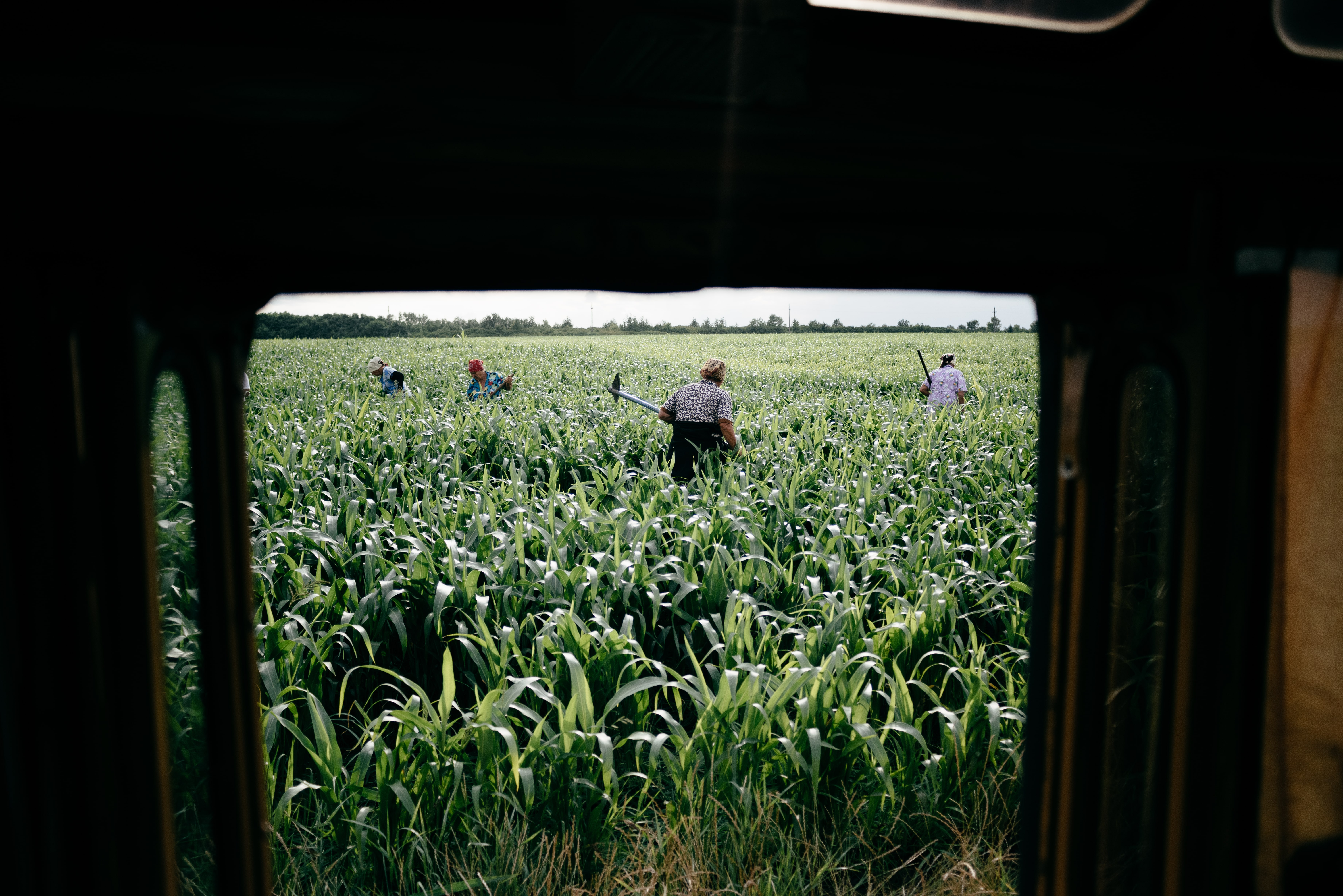 Meditating further on photography in the post-truth age, I acknowledge once again the importance of the stories we tell ourselves and others: what we look at nostalgically, what becomes a disillusion and what seems full of potential. To put it differently, on some things (or places) we project the traumas of our pasts while regarding others we allow ourselves to hope. And, rarely enough, we charge the same thing with both our nostalgia and our hope, alike. This seems to me the spirit of the images of Maria and Mikhail: we see abandoned villages and, at the same time, places that have escaped the logic of ferocious consumption, we see kids playing in post-industrial spaces and, at the same time, playing outside, interacting offline, we see the dreariness of the physical work of the peasant and also food autonomy.

It depends how we see and what stories we build with our gaze. And sometimes these stories serve to deconstruct our own identities built though the discourses of the alterity imaginary: “I am a stranger. Everywhere. I have no homeland. In Transnistria I am Moldovian and an ‘internal enemy’, in Moldova I am Russian and “alien,” despite my citizenship and internal involvement,” explains Kalarashan within the Transnistria. A man without a homeland project. In fact, Mazur also admits that documenting Transnistria came also from a need to document his personal histories. And maybe – admitting that objectivity is an obsolete claim – each documentary project is also an internal documentation, a subconscious jump towards the self. 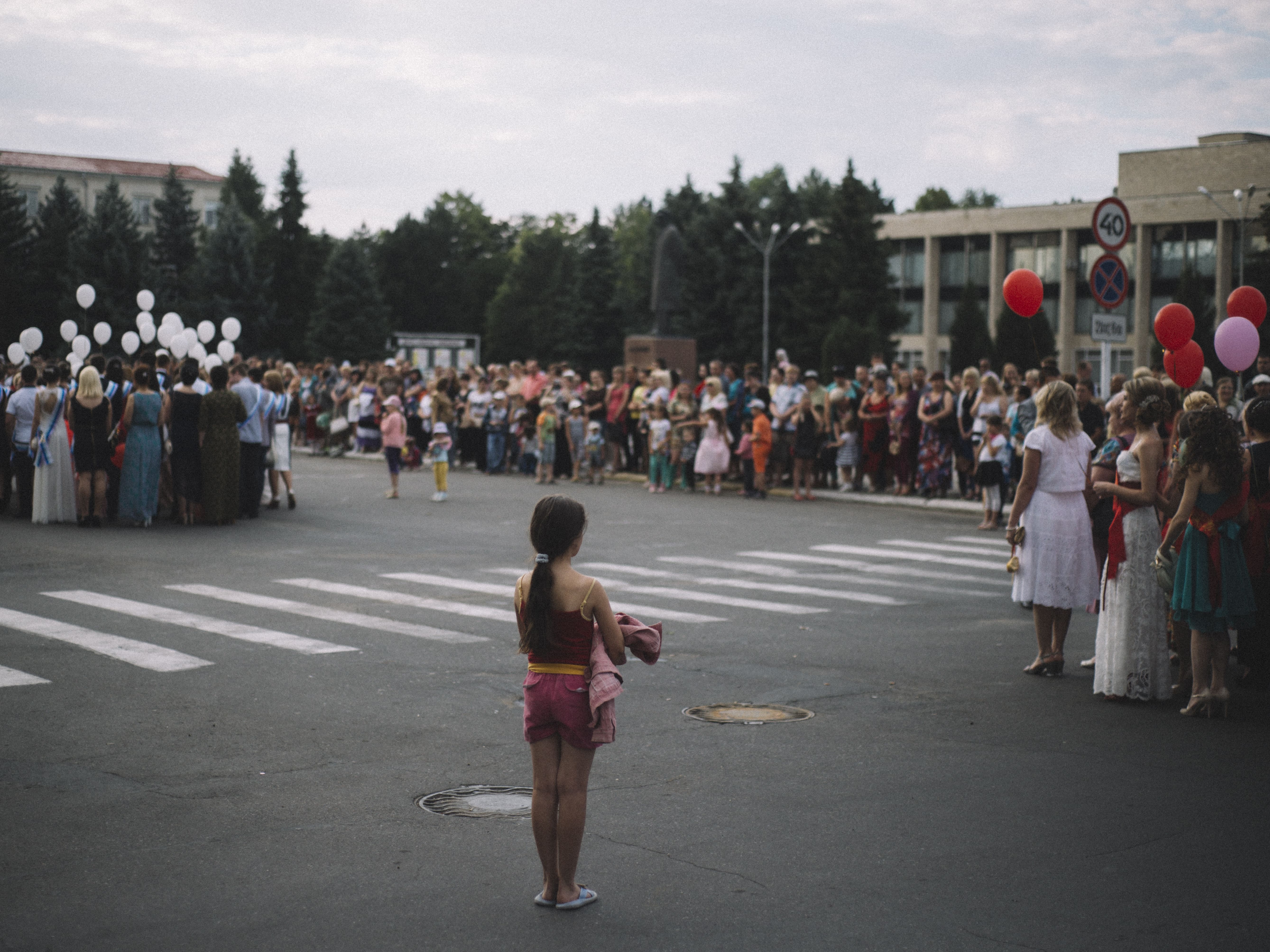 The Romanian version can be read in Arta Magazine, to be purchased from here.

A longer version of this text, encompassing a broaded look upon the contemporary Moldovan art scene, appeared on ARTA online, here. 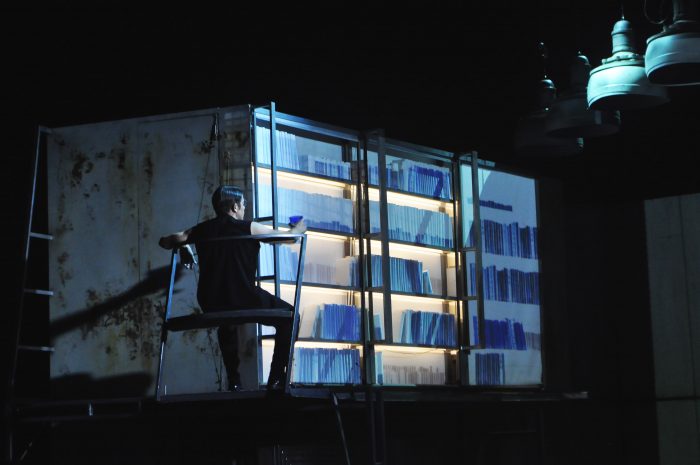